On our way from the airport to our apartment in Skopje we were chatting with our cab driver:

We were extremely amused by the shock at American tourists in Macedonia, though if not for the wedding we may have never visited the country. Also, the cab driver was very right about Macedonian weddings being an interesting experience. I was too busy partying to take any worthwhile pictures, and Arcadiy was too busy playing the role of the Kum (it’s like the godfather mixed with best man/maid of honor) to take any at all, but I did find a fun blog post that describes the wedding experience. We did have some bad experiences during our time in the country, mainly in the form of a cockroach infestation and two earthquakes, but overall we absolutely loved the country and would go back in a heartbeat.

What’s so great about Macedonia? For one thing, everybody there is really friendly. I kept joking that the Midwest, which is known for friendliness, must have a secretly large Macedonian population. Our cab driver from the airport became our cab driver for our entire time in Skopje, sharing fun stories and advice with us along the way. The owner of the Airbnb went with us to the police station to help us register – a legal requirement for international visitors – even though it took a significant chunk of his time. An old lady even force-fed me a delicious fruit (I’m still not sure what it was, maybe some kind of plum?) because it would be good for my health. The list goes on.

Arcadiy’s favorite things about Macedonia are that it’s very cheap and the food is amazing. I liked those things too.

We spent most of our time in the capital city Skopje. The city as a whole is actually very strange as the center is littered with giant statues and buildings that feel very fake and out-of-place. Maybe it’s because they are both of those things, built as part of a controversial effort by the Macedonian government to build a strong national identity. 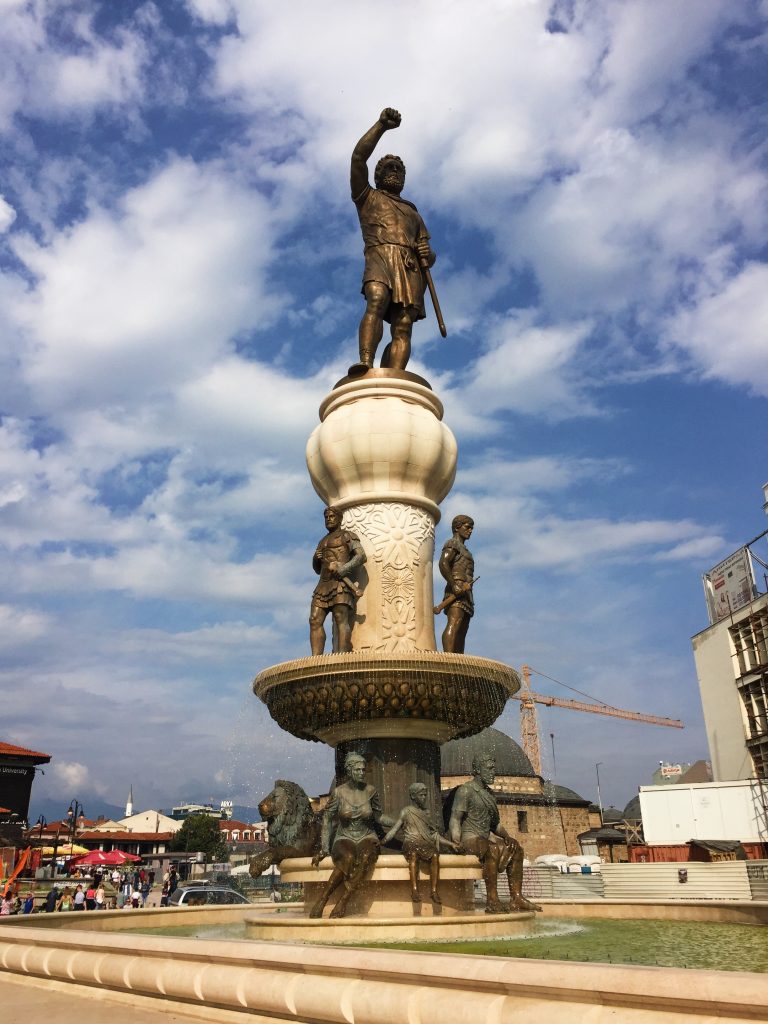 If I had to compare it to any other city I would probably compare it to Las Vegas. Not a bad thing, many people love Las Vegas, but definitely unique.

The city does have some historic landmarks as well. For example, the Kale Fortress.

The day after the wedding, the newlyweds invited everyone who traveled for the wedding to the a winery part-owned by the groom’s aunt for dinner, which has some amazing views.

Fun story: The trip to the winery was a little bit of an adventure. Our usual cab driver was out of town for the day so we decided to take an Uber. Unfortunately, Google maps directed us to the wrong side of the winery, down some country roads the cab couldn’t pass. Google said we were close to the entrance so we decided to walk the rest of the way. It turned out we had to walk the entire perimeter of the vineyard, through the mud, before arriving at our destination. Everyone had a view of us walking around the vineyard so they made fun of us when we arrived, of course 🙂

We made an overnight trip to Ohrid at the beginning of our stay, meeting up with the wedding party, to spend a little more time with our friends. Ohrid is a city on the Macedonian side of Lake Ohrid, a large lake on the border of Macedonia and Albania. In fact, Albania is close enough to the city that our friends took a trip to the border and ran through the no-man’s land between the countries to get their passports stamped. 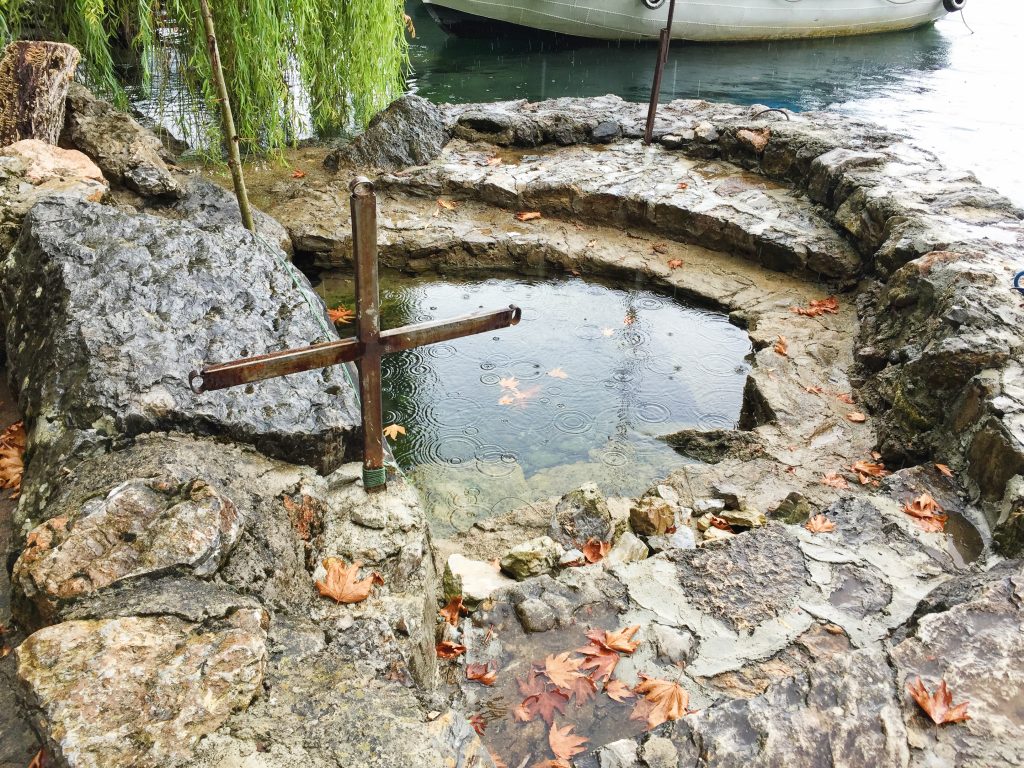 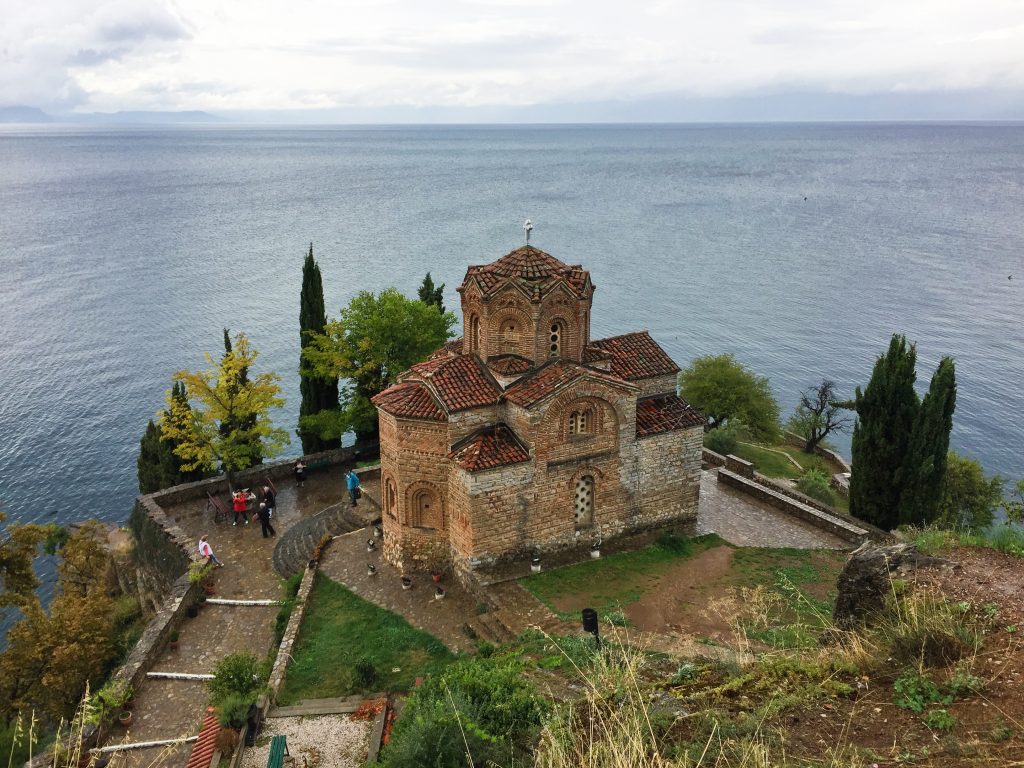 Everybody always seems to be on the lookout for places that haven’t been ruined by tourists yet. Macedonia was that find for us. Sadly, we’re not the only people that love the place as a travel destination – Lonely Planet included Ohrid on its list of best cities to travel in 2017. We, selfishly, want it for ourselves.

You can take a look at the rest of my Macedonia photos here!

One thought on “RTW Trip – Macedonia”